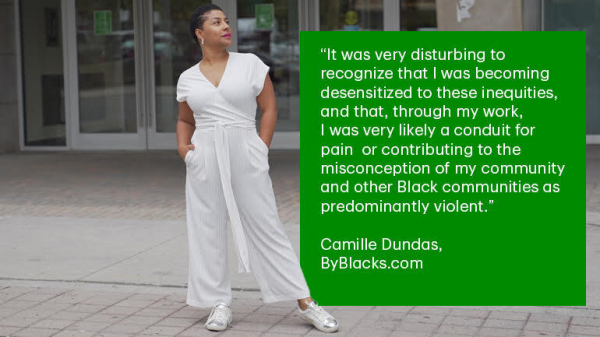 It was one night in 2009 when journalist Camille Dundas was working the late shift, that the phone rang. Though she didn't know it at the time, when Dundas picked up the receiver, she was about to have a conversation that would change the course of her work as a journalist in mainstream media.

The voice on the other end of the line belonged to the brother of a man whose mug shot had run at least a dozen times as the alleged accused perpetrator in a crime story on the news channel where Dundas worked.

"He said to me, 'my brother was just acquitted. I want to know if you are going to do a follow up story?'" Dundas recalled.

She knew the answer to the man's question was likely 'no.'

As a journalist, Dundas was accustomed to putting together stories that frequently featured people accused of crimes. Their face and name were frequently publicized before they were found innocent or guilty. In Dundas' experience, these stories more often reported young Black men. And follow up stories almost never crossed her desk.

"That’s just not how we treated these stories," Dundas said. "It was as though splashing someone's face across a screen in reporting on a crime didn’t have any real impact on these men and their families. Which just isn't true."

At that moment Dundas began to feel as though her work was making her unconsciously complicit in what she saw was a form of damaging bias.

"It was very disturbing to recognize that I was becoming desensitized to these inequities, and that, through my work, I was very likely a conduit for pain or contributing to the misconception of my community and other Black communities as predominantly violent," she said.

That night was the beginning of Dundas' gradual shift towards a career in independent media and a focus on telling stories from a more diverse lens.

Dundas said she is one of a number of Black journalists she knows who are moving away from mainstream media in response to what they see as inequitable representation and instances of anti-Black racism, both in the content and the workplace of the media - and others are advocating vocally from within.

In 2013, Dundas co-founded the Canadian online magazine, ByBlacks.com, with her partner, Roger Dundas. Together, they are committed to supporting young Black media leaders-in-the-making. The pair are working with the Canadian Association of Black Journalists (CABJ), as instructors in a new Media Bootcamp Startup program, sharing their expertise and wisdom with younger journalists, editors and content creators to help bring more diverse voices into online media.

The three-week, annual program was launched last November with support from TD Bank Group (TD) and is focused on increasing the number of Black content creators and entrepreneurs by equipping Black content creators with the tools and knowledge they need to help build and launch their own platforms. TD is the exclusive financial services sponsor of the Media Bootcamp program, committing $200,000 over three years, much of which is being used to fund the Media Bootcamp program and a grant startup program.

Students in the Media Bootcamp program learn about editorial leadership, how to build their own website, and receive instruction in search engine optimization (SEO) and social media best practices to ensure they're reading their intended audiences. Students also receive an overview of business basics, while learning about how to monetize and maintain their platform over time.

"This program was created because there is a need for it," said CABJ Executive Director Nadia Stewart.

"We were inspired by Roger and Camille's work at ByBlacks.com and felt the need for more platforms like theirs that were Black-led, new media startups that celebrate the diversity in our communities and truly reflect Black lives."

In the United States, 77% of newsroom employees were non-Hispanic whites, according to a 2018 Pew Research Center analysis of U.S. Census Bureau data. Stewart said, "there are no current diversity statistics on Canadian media."

"Our goal for the Media Bootcamp program is to increase the number of Black-owned digital media startups in Canada so that we can see Black journalists leading the way," she said.

A safe space to connect and elevate

Jode-Leigh Nembhard was a participant in the inaugural cohort of the Media Bootcamp Startup program on the heels of launching Tonedmag.com, an online magazine dedicated to amplifying the stories of Black Canadians at the intersection of race, art, and culture.

"It's been hard to find spaces in journalism that reflect me and the stories I want to share," Nembhard said.

"This program was everything that I have been looking for; a community of Black content creators and instructors to connect with and support each other; a safe space to ask questions that we might not be able to find answers to elsewhere. It's also been about learning real, practical tools to help my magazine succeed."

Matthew DiMera, founder of theresolve.ca, and an award-winning editor and journalist, was also part of the program's first cohort.

"Journalism is generally a very white—if not completely white—space, so being able to connect and learn from Black journalists like Camille Dundas who have carved their own successful paths was an amazing opportunity," he said.

DiMera said that in addition to gaining valuable technical and practical knowledge, he appreciated being inspired by the broader community of these creators and the experience of lifting each other up.

"As much as I love journalism and it's my passion, it's been a struggle on an everyday basis just to negotiate space," he said.

"I reached a point where it was not a constructive use of my time to try to convince media outlets to change. It would be more productive to create something new so I can do the work I always wanted to do: celebrate, center and elevate Black, Indigenous and racialized voices and stories. My site is launching this year and I hope the Media Bootcamp program has helped me create fertile ground for it to grow."

The importance of ownership

For many of the journalists involved in the Media Bootcamp program, the historic events of 2020 – including the killing of George Floyd and the subsequent wave of Black Lives Matter protests – highlight the need for more diversity in media.

"We need to ask ourselves who is telling these stories," said Nembhard. "Literature and art can help the next generation understand these critical moments in history, so it's important for us to have ownership over telling our stories, and our history."

As far as DiMera is concerned, "When it comes to racism, and the violence that Black communities experience, the only difference that the events of last year has made has been that our broader society is now paying attention," said DiMera.

"Having diverse, and Black-owned media outlets will help ensure that these stories don't just get told in February for Black History Month, but beyond that and until these issues are solved.", DiMera added.

For Dundas, an all-too-common narrative in media coverage is a 'power and pain' dichotomy when it comes to Black individuals. And yet, she's already seeing hope for the future coming from the Media Bootcamp program.

"More than half of the program attendees have launched their own media platforms," she said.

"This younger generation is already taking up this mantle and are going to do truly great things," she added.

What do Stephen Curry, LeBron James, Beyonce and BFUTR have in common?