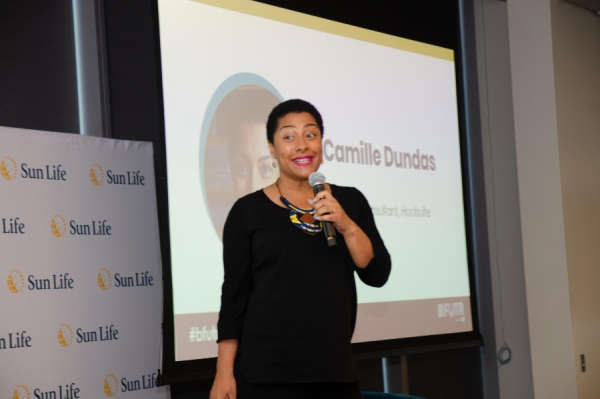 I am a tech outsider. I don’t know how to code, I didn’t go to business school. In fact I didn’t even know what API stood for when I started working in this industry two years ago.

But my existence here, my ability to rise in this industry is a reflection of the inifinite possibilities that are inherent to the tech industry.

Tech was the answer to my career stagnation. I had spent 10 years working as a TV journalist and I was brimming over with ideas. But there is little to no innovation happening in mainstream media. So all of my awesome ideas were going nowhere fast. I was miserable but totally accepted that I would stay there for the end of time.

Until someone at a tech company reached out and told me.. hey, we want what you have. Hootsuite said, we can teach you what API stands for, but we can’t teach what you have - we want your storytelling skills. And that conversation, followed by a decision to leap, completely transformed my life. I joke all the time, I’ve been on TV more times since working in tech, than when I was actually working in TV. I can barely keep up with the requests to speak both in Canada and the US.

If you're miserable doing what you're doing, know this: there is a place for you somewhere else. The success of any tech company relies on people with great ideas, with great storytelling skills and a passion for what they do.

It takes just one person, one conversation, one chance meeting to make you realize that all of your amazing ideas that were being ignored, will be sought after, somewhere else. Sometimes, in the place you least expect.

We have this idea of what someone in tech looks like. But they look like you, they look like me. There’s sometimes a feeling among us that “we don’t belong” in certain spaces. And I want to extinguish that idea completely. You can grow, you can leap you can bound over any obstacles. You do belong here. In fact you belong wherever you damn well say you belong.

I never once thought I'd ever be working in tech. But here I am, speaking on a line up of incredible leaders including Rob Meikle, CIO of City of Toronto, Colleen Ward the VP of Technology Solutions for TD Bank and Dean A. Connor, CEO of Sun Life Financial.

And now, thanks to Lekan Olawoye, the founder of Black Professionals in Technology, I'll get to be part of BFUTR in October. It's Canada's first national summit for Blacks in Tech, where 1000 people from across the nation will converge on Toronto. I’m beyond excited!

Why Governments Must Look Beyond Social Media For Diverse Hiring

What do Stephen Curry, LeBron James, Beyonce and BFUTR have in common?